Tourist spots, especially city beaches were abuzz with activity during Kaanum Pongal. Tens of thousands of people thronged these hot spots and special enforcements were pressed by police to ensure there were no accidents or loss of lives. During my evening walk to the local beach that holiday I found way more people than normal. Also, there was much more garbage on the beach than usual.

The fact that ‘more people’ is synonymous with filth is becoming a little tiring for environmentalists. “There are no facilities for proper waste disposal” quip most of these beach goers, and that is true. If it is easy to buy ice cream sticks or other packaged foods in these places, there should be facilities to recycle the waste produced as well. Most of the local vendors don’t really care enough to even have a bin provided near their kiosks. They are woefully ignorant of the environmental havoc they cause. My beach is now strewn with PET bottles, ice cream wrappers and sticks dot the landscape. They will sadly remain on the beach forever. 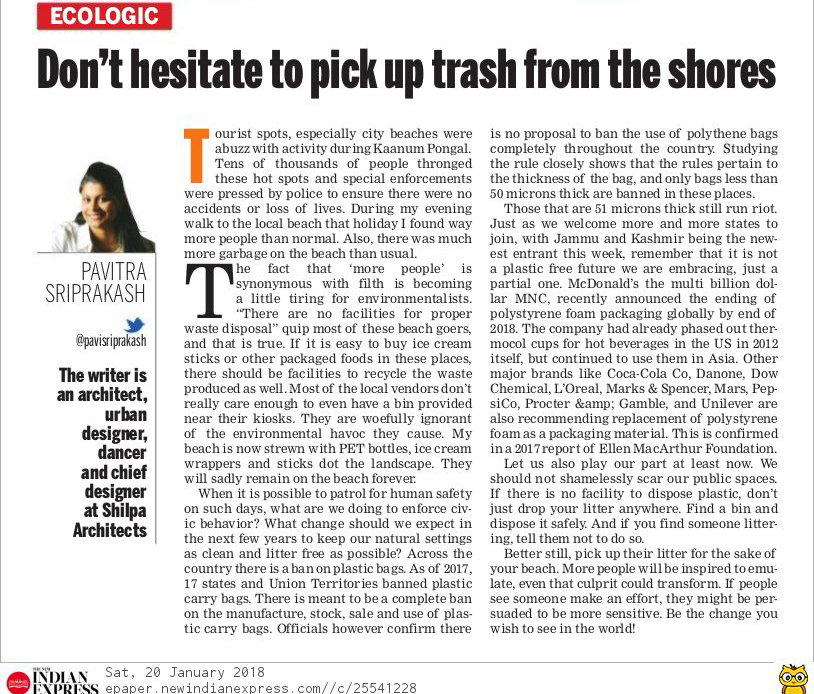 When it is possible to patrol for human safety on such days, what are we doing to enforce civic behavior? What change should we expect in the next few years to keep our natural settings as clean and litter free as possible? Across the country there is a ban on plastic bags. As of 2017, 17 states and Union Territories banned plastic carry bags. There is meant to be a complete ban on the manufacture, stock, sale and use of plastic carry bags. Officials however confirm there is no proposal to ban the use of polythene bags completely throughout the country. Studying the rule closely shows that the rules pertain to the thickness of the bag, and only bags less than 50 microns thick are banned in these places.

Those that are 51 microns thick still run riot. Just as we welcome more and more states to join, with Jammu and Kashmir being the newest entrant this week, remember that it is not a plastic free future we are embracing, just a partial one. McDonald’s the multi billion dollar MNC, recently announced the ending of polystyrene foam packaging globally by end of 2018. The company had already phased out thermocol cups for hot beverages in the US in 2012 itself, but continued to use them in Asia. Other major brands like Coca-Cola Co, Danone, Dow Chemical, L’Oreal, Marks & Spencer, Mars, PepsiCo, Procter &amp; Gamble, and Unilever are also recommending replacement of polystyrene foam as a packaging material. This is confirmed in a 2017 report of Ellen MacArthur Foundation.

Let us also play our part at least now. We should not shamelessly scar our public spaces. If there is no facility to dispose plastic, don’t just drop your litter anywhere. Find a bin and dispose it safely. And if you find someone littering, tell them not to do so. Better still, pick up their litter for the sake of your beach. More people will be inspired to emulate, even that culprit could transform. If people see someone make an effort, they might be persuaded to be more sensitive. Be the change you wish to see in the world!