January 6th 2018, New Indian Express: ECOLOGIC- Pavitra Sriprakash, the Chief Designer and Director of Shilpa Architects writes on ways to take the ‘disgust’ out of sustainability. 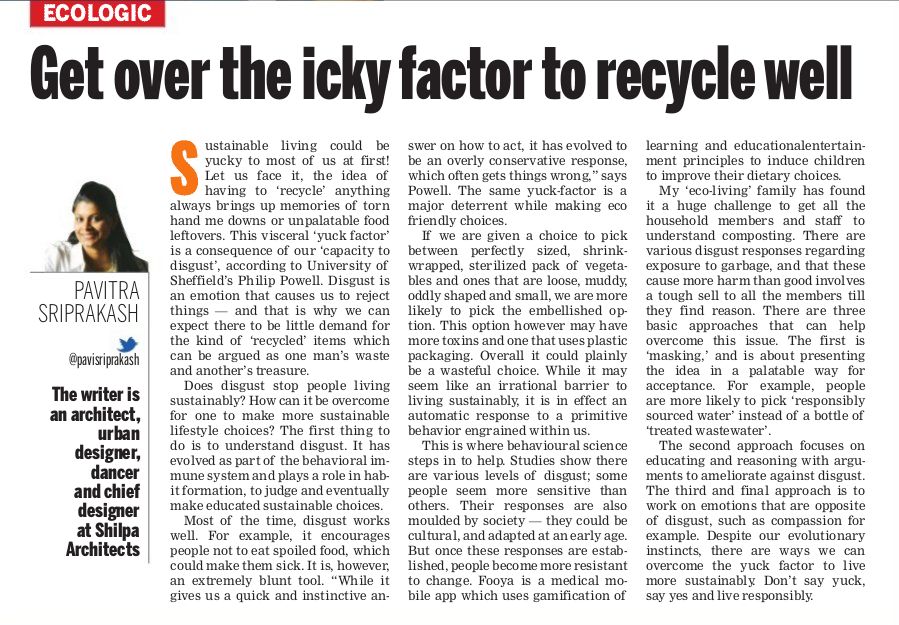 Sustainable living could be yucky to most of us at first! Let us face it, the idea of having to ‘recycle’ anything always brings up memories of torn hand me downs or unpalatable food leftovers. This visceral ‘yuck factor’ is a consequence of our ‘capacity to disgust’, according to University of Sheffield’s Philip Powell. Disgust is an emotion that causes us to reject things — and that is why we can expect there to be little demand for the kind of ‘recycled’ items which can be argued as one man’s waste and another’s treasure.

Does disgust stop people living sustainably? How can it be overcome for one to make more sustainable lifestyle choices? The first thing to do is to understand disgust. It has evolved as part of the behavioral immune system and plays a role in habit formation, to judge and eventually make educated sustainable choices.

Most of the time, disgust works well. For example, it encourages people not to eat spoiled food, which could make them sick. It is, however, an extremely blunt tool. “While it gives us a quick and instinctive answer on how to act, it has evolved to be an overly conservative response, which often gets things wrong,” says Powell. The same yuck-factor is a major deterrent while making eco friendly choices.

If we are given a choice to pick between perfectly sized, shrink-wrapped, sterilized pack of vegetables and ones that are loose, muddy, oddly shaped and small, we are more likely to pick the embellished option. This option however may have more toxins and one that uses plastic packaging. Overall it could plainly be a wasteful choice. While it may seem like an irrational barrier to living sustainably, it is in effect an automatic response to a primitive behavior engrained within us.

This is where behavioural science steps in to help. Studies show there are various levels of disgust; some people seem more sensitive than others. Their responses are also moulded by society — they could be cultural, and adapted at an early age. But once these responses are established, people become more resistant to change. Fooya is a medical mobile app which uses gamification of learning and educationalentertainment principles to induce children to improve their dietary choices.

My ‘eco-living’ family has found it a huge challenge to get all the household members and staff to understand composting. There are various disgust responses regarding exposure to garbage, and that these cause more harm than good involves a tough sell to all the members till they find reason. There are three basic approaches that can help overcome this issue. The first is ‘masking,’ and is about presenting the idea in a palatable way for acceptance. For example, people are more likely to pick ‘responsibly sourced water’ instead of a bottle of ‘treated wastewater’.

The second approach focuses on educating and reasoning with arguments to ameliorate against disgust. The third and final approach is to work on emotions that are opposite of disgust, such as compassion for example. Despite our evolutionary instincts, there are ways we can overcome the yuck factor to live more sustainably. Don’t say yuck, say yes and live responsibly.