To my utter relief Akkarai Beach, where I run every morning, was suddenly clear of all the unhealthy water hyacinth. There are no more entrapped plastics or thermocol among the weeds. Fishermen along the ECR are gravely concerned by these pollutants, especially during the monsoons. Local reports indicate that seawater infested with plastic and hyacinth chase fish away.

This in turn affects the daily earnings of fishermen in the nearby hamlets fish supply to the local shops impacted. The issue runs the entire cycle and shows how deeply our lives are interconnected with the health of our oceans! 80% of marine pollution comes from land. Air pollution is also a contributing factor by carrying off pesticides or dirt into the ocean. Land and air pollution have proven to be harmful to marine life and its habitats. 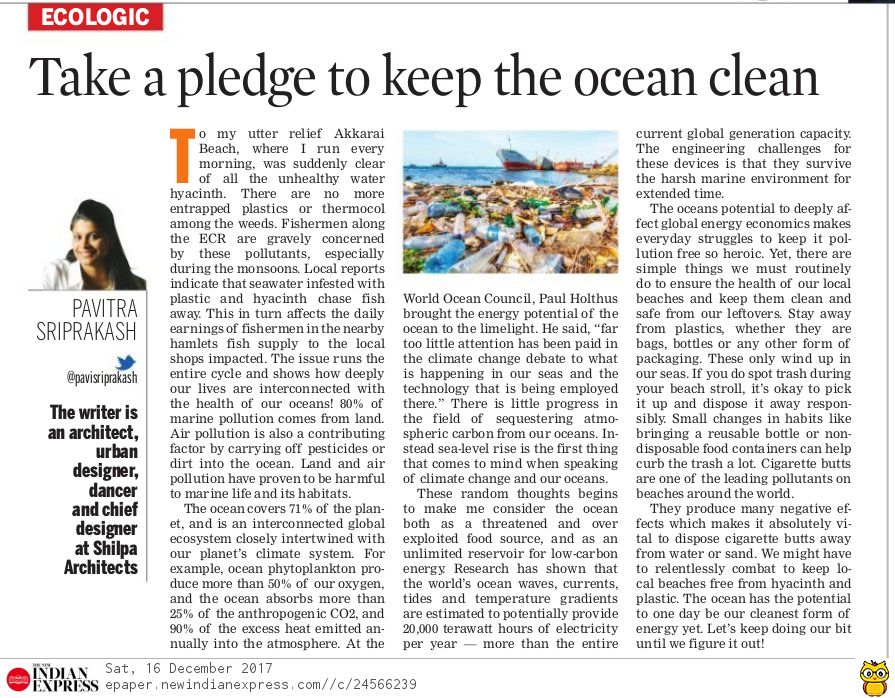 The ocean covers 71% of the planet, and is an interconnected global ecosystem closely intertwined with our planet’s climate system. For example, ocean phytoplankton produce more than 50% of our oxygen, and the ocean absorbs more than 25% of the anthropogenic CO2, and 90% of the excess heat emitted annually into the atmosphere.

At the World Ocean Council, Paul Holthus brought the energy potential of the ocean to the limelight. He said, “far too little attention has been paid in the climate change debate to what is happening in our seas and the technology that is being employed there.” There is little progress in the field of sequestering atmospheric carbon from our oceans. Instead sea-level rise is the first thing that comes to mind when speaking of climate change and our oceans.

These random thoughts begins to make me consider the ocean both as a threatened and over exploited food source, and as an unlimited reservoir for low-carbon energy. Research has shown that the world’s ocean waves, currents, tides and temperature gradients are estimated to potentially provide 20,000 terawatt hours of electricity per year — more than the entire current global generation capacity. The engineering challenges for these devices is that they survive the harsh marine environment for extended time.

The oceans potential to deeply affect global energy economics makes everyday struggles to keep it pollution free so heroic. Yet, there are simple things we must routinely do to ensure the health of our local beaches and keep them clean and safe from our leftovers. Stay away from plastics, whether they are bags, bottles or any other form of packaging. These only wind up in our seas. If you do spot trash during your beach stroll, it’s okay to pick it up and dispose it away responsibly. Small changes in habits like bringing a reusable bottle or non-disposable food containers can help curb the trash a lot. Cigarette butts are one of the leading pollutants on beaches around the world.

They produce many negative effects which makes it absolutely vital to dispose cigarette butts away from water or sand. We might have to relentlessly combat to keep local beaches free from hyacinth and plastic. The ocean has the potential to one day be our cleanest form of energy yet. Let’s keep doing our bit until we figure it out!