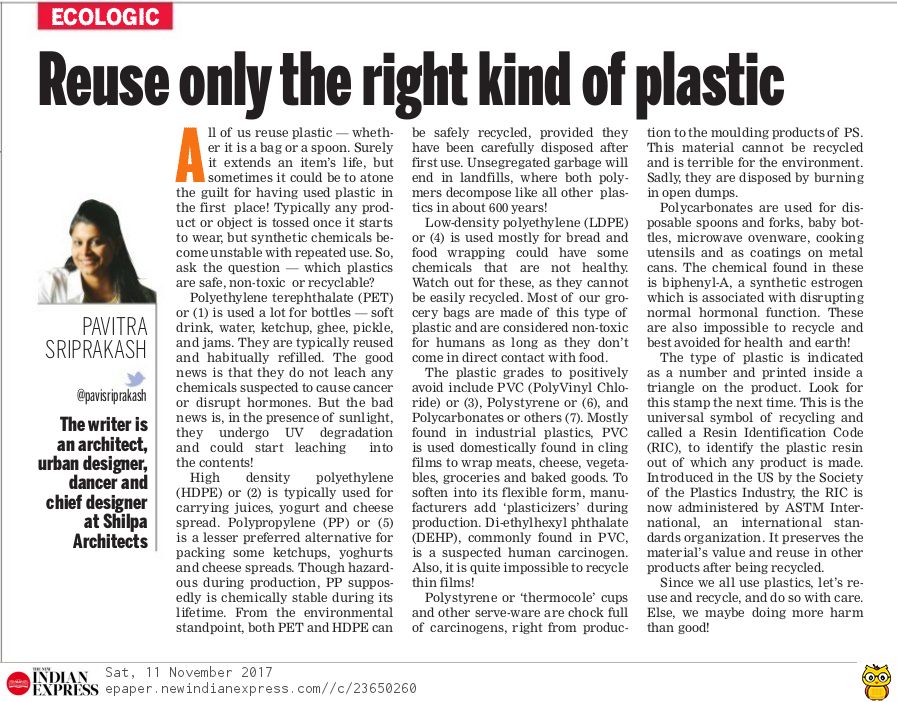 Reuse only the right kind of plastic

All of us reuse plastic — whether it is a bag or a spoon. Surely it extends an item’s life, but sometimes it could be to atone the guilt for having used plastic in the first  place! Typically any product or object is tossed once it starts to wear, but synthetic chemicals become unstable with repeated use. So, ask the question — which plastics are safe, non-toxic  or recyclable?

Polyethylene terephthalate (PET) or (1) is used a lot for bottles — soft drink, water, ketchup, ghee, pickle, and jams. They are typically reused and habitually refilled. The good news is that they do not leach any chemicals suspected to cause cancer or disrupt hormones. But the bad news is, in the presence of sunlight, they undergo UV degradation and could start leaching  into the contents!

High density polyethylene (HDPE) or (2) is typically used for carrying juices, yogurt and cheese spread. Polypropylene (PP) or (5) is a lesser preferred alternative for packing some ketchups, yoghurts and cheese spreads. Though hazardous during production, PP supposedly is chemically stable during its lifetime. From the environmental standpoint, both PET and HDPE can be safely recycled, provided they have been carefully disposed after first use. Unsegregated garbage will end in landfills, where both polymers decompose like all other  plastics in about 600 years!

Low-density polyethylene (LDPE) or (4) is used mostly for bread and food wrapping could have some chemicals that are not healthy. Watch out for these, as they cannot be easily recycled. Most of our grocery bags are made of this type of plastic and are considered non-toxic for humans as long as they don’t come in direct contact with food.

The plastic grades to positively avoid include PVC (PolyVinyl Chloride) or (3), Polystyrene or (6), and Polycarbonates or others (7). Mostly found in industrial plastics, PVC is used domestically found in cling films to wrap meats, cheese, vegetables, groceries and baked goods. To soften into its flexible form, manufacturers add ‘plasticizers’ during production. Di-ethylhexyl phthalate (DEHP), commonly found in PVC, is a suspected human carcinogen. Also, it is quite impossible to recycle thin films!

Polystyrene or ‘thermocole’ cups and other serve-ware are chock full of carcinogens, right from production to the moulding products of PS. This material cannot be recycled and is terrible for the environment. Sadly, they are disposed by burning in open dumps.

Polycarbonates are used for disposable spoons and forks, baby bottles, microwave ovenware, cooking utensils and as coatings on metal cans. The chemical found in these is biphenyl-A, a synthetic estrogen which is associated with disrupting normal hormonal function. These are also impossible to recycle and best avoided for health  and earth!

The type of plastic is indicated as a number and printed inside a triangle on the product. Look for this stamp the next time. This is the universal symbol of recycling and called a Resin Identification Code (RIC), to identify the plastic resin out of which any product is made. Introduced in the US by the Society of the Plastics Industry, the RIC is now administered by ASTM International, an international standards organization. It preserves the material’s value and reuse in other products after being recycled.