February 17th 2018, New Indian Express: ECOLOGIC- Pavitra Sriprakash, the Chief Designer and Director of Shilpa Architects writes on how we need to be responsible with waste disposal keeping in mind sewage treatment and its management.

This sparked a debate among the judges on what comprises sewage today — a yucky subject, and not one that we talk about often. While the debate continued, the ‘Fatberg’ discovered in London’s sewer was trending on social media. 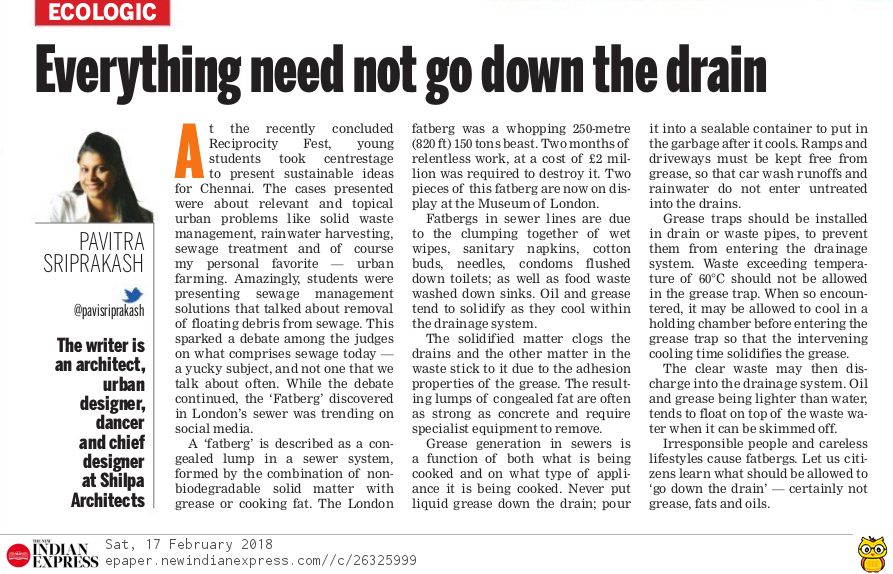 A ‘fatberg’ is described as a congealed lump in a sewer system, formed by the combination of non-biodegradable solid matter with grease or cooking fat. The London fatberg was a whopping 250-metre (820 ft) 150 tons beast. Two months of relentless work, at a cost of £2 million was required to destroy it. Two pieces of this fatberg are now on display at the Museum of London.

Fatbergs in sewer lines are due to the clumping together of wet wipes, sanitary napkins, cotton buds, needles, condoms flushed down toilets; as well as food waste washed down sinks. Oil and grease tend to solidify as they cool within the drainage system.

The solidified matter clogs the drains and the other matter in the waste stick to it due to the adhesion properties of the grease. The resulting lumps of congealed fat are often as strong as concrete and require specialist equipment to remove.

Grease generation in sewers is a function of both what is being cooked and on what type of appliance it is being cooked. Never put liquid grease down the drain; pour it into a sealable container to put in the garbage after it cools. Ramps and driveways must be kept free from grease, so that car wash runoffs and rainwater do not enter untreated into the drains.

Grease traps should be installed in drain or waste pipes, to prevent them from entering the drainage system. Waste exceeding temperature of 60°C should not be allowed in the grease trap. When so encountered, it may be allowed to cool in a holding chamber before entering the grease trap so that the intervening cooling time solidifies the grease.

The clear waste may then discharge into the drainage system. Oil and grease being lighter than water, tends to float on top of the waste water when it can be skimmed off.

Irresponsible people and careless lifestyles cause fatbergs. Let us citizens learn what should be allowed to ‘go down the drain’ — certainly not grease, fats and oils.