For many the idea of going green starts and stops at recycling. While recycling maybe an integral part of green living, there are some other easy ways to a green lifestyle. Try your hand with a herb garden. There are many benefits to know where our food originates, and this one is easy. You may well ask, ‘Where’s the space for growing food at home in the city?’. Hydroponic gardening could be your answer. A recent trip to a hydroponics farm on the ECR strengthened my resolve to try it in my backyard this year. 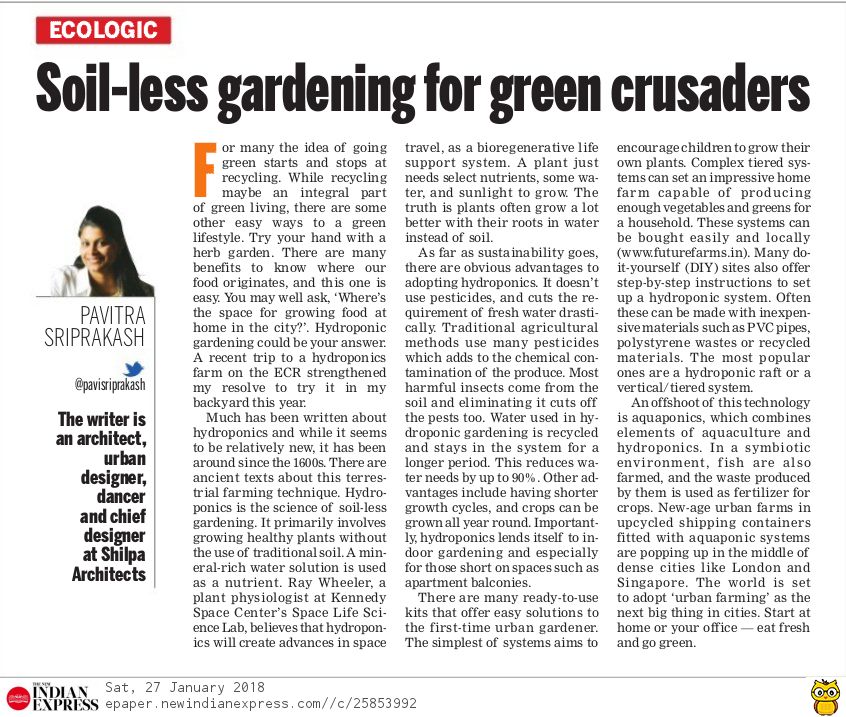 Much has been written about hydroponics and while it seems to be relatively new, it has been around since the 1600s. There are ancient texts about this terrestrial farming technique. Hydroponics is the science of soil-less gardening. It primarily involves growing healthy plants without the use of traditional soil. A mineral-rich water solution is used as a nutrient. Ray Wheeler, a plant physiologist at Kennedy Space Center’s Space Life Science Lab, believes that hydroponics will create advances in space travel, as a bioregenerative life support system. A plant just needs select nutrients, some water, and sunlight to grow. The truth is plants often grow a lot better with their roots in water instead of soil.

As far as sustainability goes, there are obvious advantages to adopting hydroponics. It doesn’t use pesticides, and cuts the requirement of fresh water drastically. Traditional agricultural methods use many pesticides which adds to the chemical contamination of the produce. Most harmful insects come from the soil and eliminating it cuts off the pests too. Water used in hydroponic gardening is recycled and stays in the system for a longer period. This reduces water needs by up to 90%. Other advantages include having shorter growth cycles, and crops can be grown all year round. Importantly, hydroponics lends itself to indoor gardening and especially for those short on spaces such as apartment balconies.

There are many ready-to-use kits that offer easy solutions to the first-time urban gardener. The simplest of systems aims to encourage children to grow their own plants. Complex tiered systems can set an impressive home farm capable of producing enough vegetables and greens for a household. These systems can be bought easily and locally (www.futurefarms.in). Many do-it-yourself (DIY) sites also offer step-by-step instructions to set up a hydroponic system. Often these can be made with inexpensive materials such as PVC pipes, polystyrene wastes or recycled materials. The most popular ones are a hydroponic raft or a vertical/tiered system.

An offshoot of this technology is aquaponics, which combines elements of aquaculture and hydroponics. In a symbiotic environment, fish are also farmed, and the waste produced by them is used as fertilizer for crops. New-age urban farms in upcycled shipping containers fitted with aquaponic systems are popping up in the middle of dense cities like London and Singapore. The world is set to adopt ‘urban farming’ as the next big thing in cities. Start at home or your office — eat fresh and go green.