SHILPA Architects has always supported efforts to find ways to address global concerns about the future of the world. The newsletter would bring to focus in this edition, the contributions made towards that mission as a responsible firm committed to design excellence and as individuals who are passionate about architecture and urban design. We also share some of the recognitions that were received in this direction during the last quarter. This newsletter believes that “Urbanization is the new Globalization”! With more than half the world already living in cities, this number is expected to shoot up to two thirds by 2050.  70% of greenhouse gas emissions and two-thirds of the world’s overall energy consumption is by cities and urban centers. With such unprecedented growth, efforts to build live able and sustainable cities are hampered by mounting challenges in critical areas including Climate Change.

The “Bene Merenti” Medallion is given for dedication and service by universities to the cause of supporting education. The University of Architecture and Urbanism, Bucharest, Romania (est. in 1952) and the Ministry of National Education and Scientific Research recognised Sheila Sri Prakash with this award. The practice of such recognition originated with the Catholic Church and in 1925, the concept of awarding this medal as a mark of recognition to persons in service of the Church, both civil and military, lay and clergy alike, became acceptable. The Bene Merenti Award to Sheila is part of the global acknowledgement she receives for championing the cause of our earth whose destiny is entwined with all the biomes we humans share quite irresponsibly.

Moncler is an Italian apparel manufacturer and lifestyle brand founded in 1952 by René Ramillon most known for its winter jackets and sportswear. In 2003, the brand was bought by the Italian entrepreneur Remo Ruffini. They invited Pavitra Sriprakash, along with artists, fashion designers, friends of the brand chosen to represent different fields, cultural icons from the worlds of international pop-culture, music and design to donate a piece of their artwork. These were displayed and auctioned to support 2 full-time students to undertake their MA Degree program at the prestigious Royal College of Art, London.

Even the most cursory look at our cities, reveals the huge urban housing shortage. The recently released Report of the Technical Group on Urban Housing Shortage (TG-12) (2012-17) has estimated the Housing shortage to be 18.78 million out of which 56.18 percent is in the economically weaker segments and 39.44 percent is in the Lower income group categories. As per projections of a report by the McKinsey Global Institute, the housing shortage under business as usual circumstances could go up to 38 million units by 2030. SHILPA has always been working on affordable housing and works with their clients to provide innovative design solutions. As a continuation of the theme of urbanization, Springfield, a community at Medavakkam, Chennai and promoted by NAVINS has won the NDTV Property Award for Budget Apartment Project of the Year.

Pavitra Sriprakash is a columnist and is invited to speak on radio programs in her special interest area of sustainability. Her column ECOLOGIC in the Chennai Express (The New Indian Express City Edition) has an avid following as well as on social media. This publication would like to reproduce one article from those that appeared in the last quarter as a tribute to her fans.

I invite your comments and feedback and till next time, ciao! 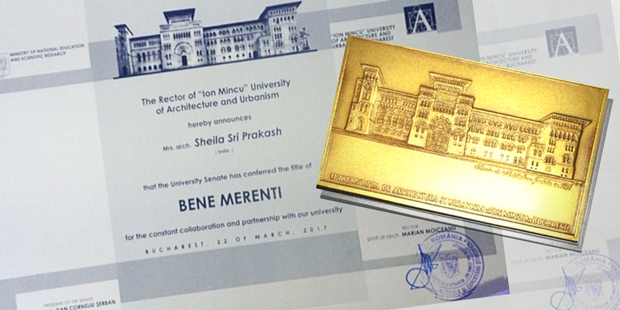 Award for a project designed by Shilpa Architects