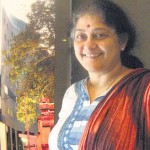 Awards and honours are never easy to come by; and when they do, you cherish them all the more. For Sheila Sri Prakash too, it has been one exhilarating and colourful journey, marking her career as an architect. She has the honour of being the only Indian woman architect chosen by the Leibniz University, Hanover, Germany and the University of Valencia, Spain, to exhibit her works at exhibitions later this year.

“When I established my office in 1979, I had to face the heat of discrimination. I had to prove that I was just as good as my male counterparts, if not better,” Sheila adds.

Sheila has two patents to her credit. The first one is for designing a monolithic polyethylene chamber, a hygienic alternative for drainage lines. The other patent was for designing a diversion chamber used to divert sewage from the toilet to an alternative dispersion pit for use in low-cost rural sanitation.

“I have also worked on cost effective housing for the economically weaker sections of the society,” says Sheila who is also devoted to social causes. More than 50 per cent of Sheila’s employees are women. “I empathise with them and find them easy to communicate with,” she opines. 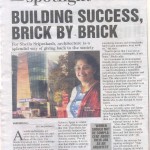